Kearneys in the 1939 Register

Since my last post there has been another weekend of free access to the 1939 Register. I’ve enjoyed having free access and found quite a few new records to add to my collection. I’ll be sharing some of them here.

I haven’t done too much research to my husband’s family tree yet but I did discover where his paternal grandparents were living in 1939 – 44 Lawrence Avenue, Walthamstow, London. 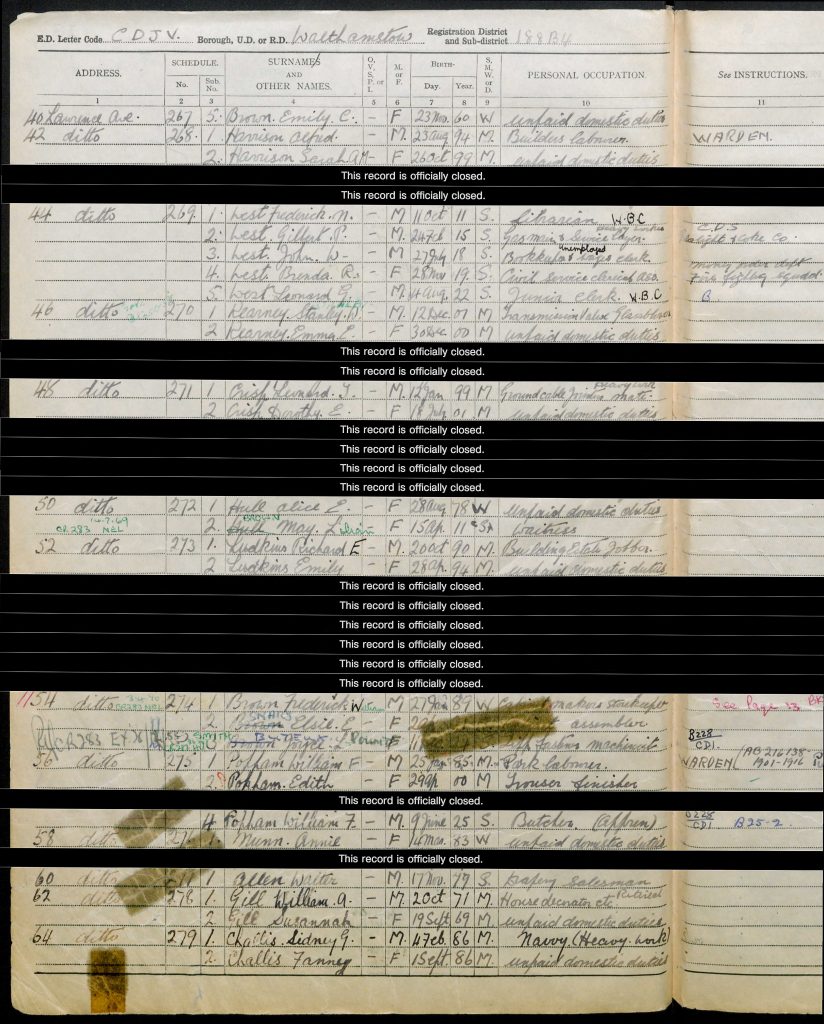 Stanley Kearney’s occupation was a Transmission Valve Glassblower whilst his wife Emma did unpaid domestic duties. I think they had two children at home but these records are currently closed as they are both living.

I love that the page has been annotated with little snippets of information relating to war work. Sadly there are no additional facts for me.

Alongside my interest in family history I would also love to find the time to research the history of our house. It’s a small terrace in suburban London.

Whilst we were renovating under the stairs we found a trunk full of junk which looked like it has been put aside for the rag and bone man. As well as old saucepans, and light fittings there were lots of framed pictures, a photograph of a man in uniform and a school spelling list. Intriguing stuff!

We re-used the picture frames in our own front room but took the rest of the items to the tip. It just made me want to find out more about the person who put them there and who has lived in our house. Our house isn’t particularly old. According to an old map our house was built on open fields like much of Greater London. The Land Registry has the following:

The following are details of the covenants contained in the Conveyance dated 21 December 1898 referred to in the Charges Register:-

AND the said Alfred Stoner hereby covenants with the said Richard Bennett to the intent that the covenant shall bind the said land into whosoever hands it may come but so that he the said Alfred Stones shall not be personally liable in respect thereof after he has parted with the said land. That he will at his own expense make up an afterwards maintain until taken over by the local authorities on half of so much of all roads shown on the said plan as abut upon the hereditaments hereby conveyed and that he will not erect or build or permit the same or any part thereof or any buildings thereon to be used as or for a Hospital Board School for Elementary Education or as or for any Institution of a similar nature. And that he will observe and perform all the stipulations conditions and restrictions as to buildings and otherwise set forth in the Schedule hereto so far as to buildings and affect the hereditaments hereby granted and conveyed.

The schedule above referred to:

1. The Purchaser is forthwith to make and afterwards to maintain the boundary fence next Melrose Avenue aforesaid and surrounding the adjoining property not included in this sale fronting on Melrose Avenue.

2. Nothing is to be erected between the building line as shown in the plan drawn in the margin hereof and the road frontages except fences and those not more than 5 feet high.

3. No building other than dwellinghouses shall be erected on the piece of land hereby agreed to be sold on the portion of land indicated by the colour dark green of less value than £250. The value of a house is the amount of its net first cost in materials and labour of construction only estimated at the lowest current prices. No building shall be erected or used as a workshop warehouse or factory and no operative machinery shall be placed or fixed upon the property nor shall any caravan or house on wheels be placed or used therein.

The following are details of the covenants contained in the Conveyance dated 11 January 1937 referred to in the Charges Register:-

The Purchaser hereby covenants with the Vendors to the intent that the covenant shall bind the property hereby conveyed into whosoever hands it may come but so that the Purchaser shall not be personally liable in respect thereof after he has parted with the said property that he will not erect or build or permit the said property or any part thereof or any buildings thereon to be used as or for a hospital board school for elementary education or as for any institution of a similar nature.