Musings on the 1939 Register

I seem to have collected a lot of information which I haven’t got round to using or putting in the proper place. Any one else or just me who has piles and piles of notes?

With thought of the 75th anniversary of VE Day I thought I would share some of my recent finds from the 1939 Register. This is a great source of information and I love tracking down family to see where they were.

In 1939 my grandparents were living in Badgeworth Road, Gloucester. My grandfather was an aircraft fitter and my grandmother undertaking unpaid domestic duties. 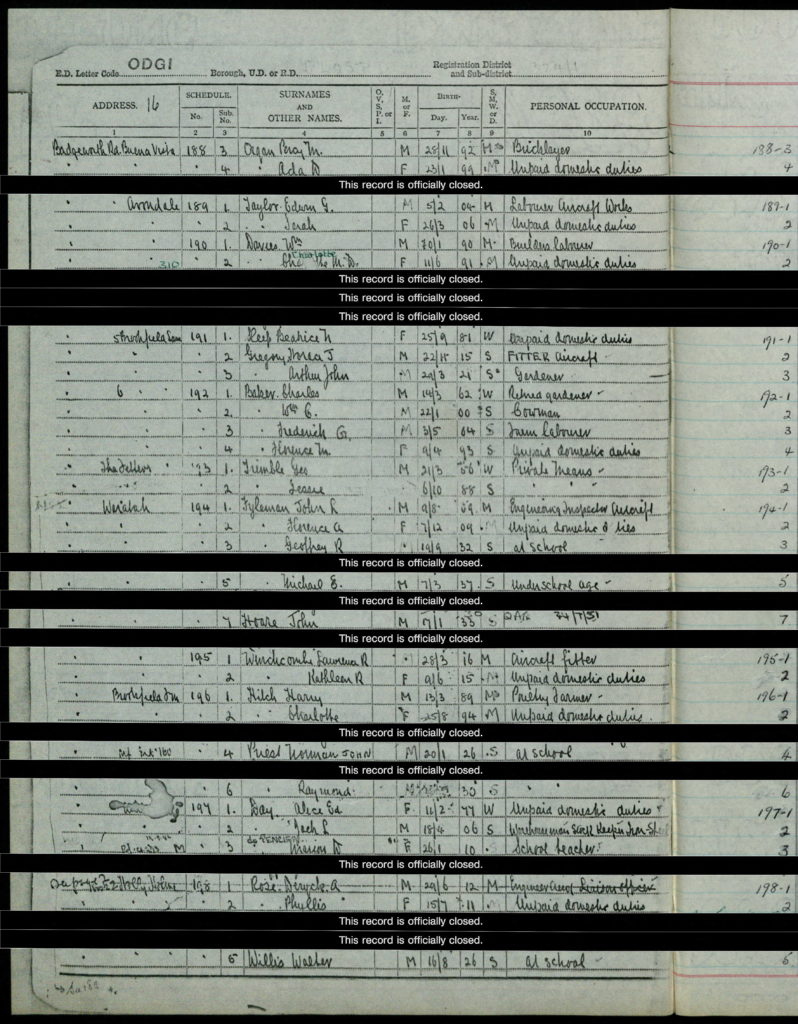 Over in Swindon I found my great-grandmother, along with two of her grown up and married children, living at 1 Whiteman Street. Her two daughters both worked in the Stemming Department at Wills Tobacco Factory. 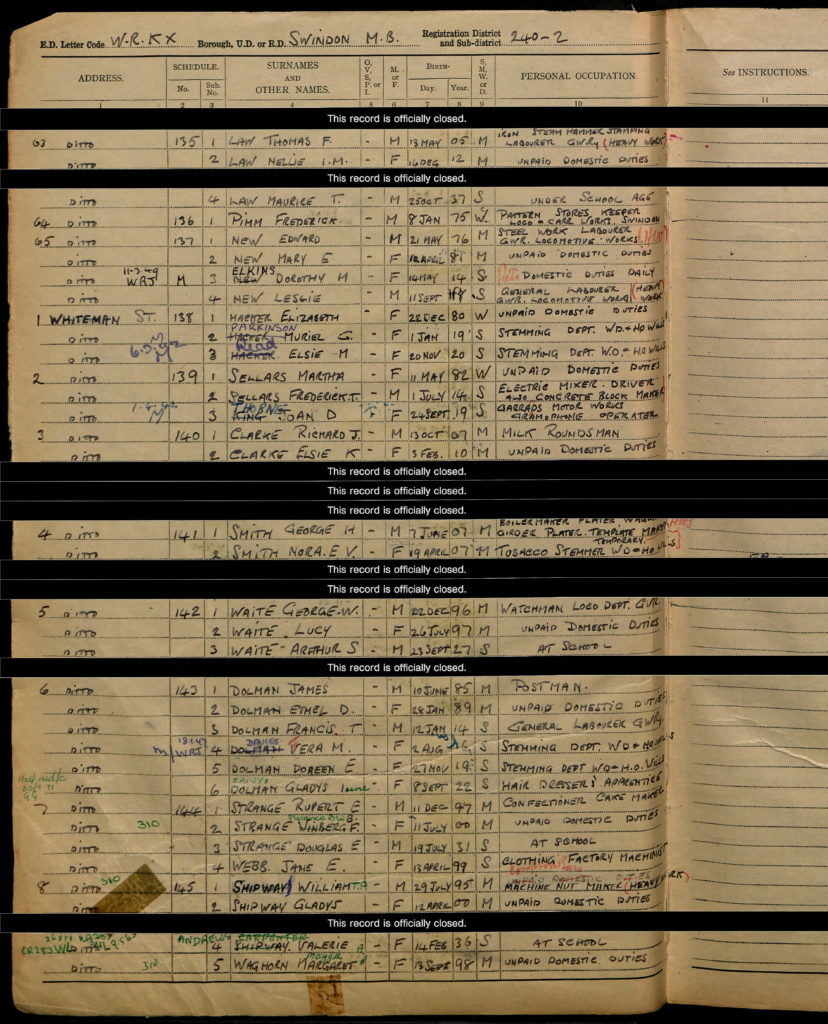 I’m not sure why I didn’t track down other members of the family. I will have to add that to my to do list.

One more record from The Genealogist relates to my great great grandfather Benjamin Hacker (1805-1890).

This is an extract from Tithe Records for Plot 280 in Broad Hinton, Wiltshire, dated 21st April 1845.

I found this interesting record thanks to my free trial on The Genealogist website. I have very few records post the 1911 census so was excited to see Alfred Benjamin Hacker listed as the resident of 1 Whiteman’s Street, Swindon in the 1915 Swindon Voters list. Although he died in 1935 his wife Elizabeth Hacker lived in the house until the late 1950s when she moved to a council house in Portal Road with one of her daughters and her family. 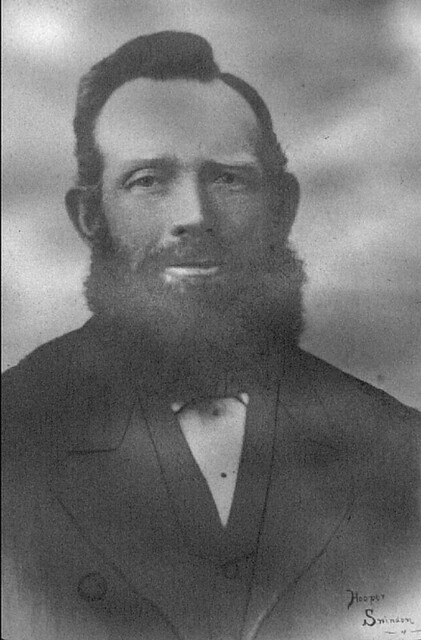 Shocking Fatality at Broad Hinton: A sequel to “The Fifth”; “David and Jonathan”; The danger of firearms; Inquest and verdict

The inhabitants of Broad Hinton celebrated the anniversary of Guy Fawkes’ Day on Monday. They will long remember it with feelings of sadness for a terrible catastrophe ended the celebrations.

Charles Hunt, a young fellow, of 19 years, was accidentally shot by his bosom friend.

There had been a bonfire lighted in a small paddock near the church, and Charles Hunt, with Alfred Hacker, a young man of his own age, had been amusing themselves by firing off an old-fashioned pistol. Suddenly the weapon missed fire, and Hacker proceeded to examine it, the deceased, Hunt, meanwhile looking on. The pistol went off, and the bullet pierced the left side of the poor young fellow, Hunt, who dropped to the ground with a groan.

He was carried to his home, an P.C. Moore was soon on the spot. A messenger was despatched for Dr. Cressy, of Wroughton, and that gentleman rode over on his bicycle with commendable promptitude. His skill was of no avail, however, for after lingering through the night, the young fellow died on Tuesday morning about five o’clock.

It was a terrible scene, said a person who was present. Hunt was a respectable young fellow, of a respectable family, and Hacker was his bosom friend – in fact, the two had often been compared to David and Jonathan. The movements of one were copied by the other; what one did, the other felt it was his duty to do likewise.

The grief of Hacker can best be imagined, when he saw his best friend fall to the ground. He was dazed, he couldn’t realise that his mate was shot – and by him.

The pistol was taken possession of by the police, and the coroner acquainted with the facts.

Deceased is one of a family of ten, and worked for Mr. Charles Leighfield of Bynoh [or Bynoli?]. The family are much respected in the village, and the sad occurrence will long be remembered by them as a terrible sequel to their Guy Fawkes’ celebration of 1899.

The inquest on the body of the deceased was held on Wednesday morning at the Bell Inn, Broad Hinton, before Mr W.E. N. Browne, County Coroner, and a jury, of whom the Rev. R.C. Crokat was foreman.

The body was first identified by the sister of the deceased, Elizabeth Hunt, who said her brother was aged 18 years. It was soon after eight o’clock when her brother was brought home after the accident. Later on he told he didn’t think poor “Benny” (meaning Alfred Hacker), who was holding the pistol at the time of the accident, would get much sleep that night. It was a pure accident, he said.

Alfred Tasker, a tall young fellow, who appeared afraid to give whatever evidence he knew, said he was present when the deceased and Hacker were amusing themselves with the pistol. Hacker had the pistol, and it was only fired off once before the accident to his knowledge. He could  not say who loaded the pistol after the first shot. Hunt was standing at the right of Hacker, witness at the left, when it went off accidentally, and struck deceased. The latter was taken home by two young fellows. There was no illfeeling between the young men at all. They had simply gone out together for the purpose of lighting a bonfire when the accident occurred. Witness was ignorant as to owned the pistol; he had never seen it before.

Albert Bunce, another young fellow, about 18 years of age, said he was present with Alfred Hacker, Charlie Hunt and Tasker. The four of them had gone out together to “have a bit of a bonfire,” and soon after he heard the report of a pistol close by him, and heard that Hunt had been shot. Hacker was holding the pistol, but witness was sure it was a pure accident. He heard Hunt cry out, “I’m shot,” and after walking a few yards fell to the ground. Until he heard the report witness said he did not know Hacker had a pistol in his possession.

Mary Hayes, an elderly lady, said she sat up with the deceased during the night after the accident. “I shall never forget bonfire night,” she said. “Poor Ben, it was a pure accident, but he will have little sleep to-night.” A change came over the sufferer in the early morning, and he died. She knew that he and Hacker had been bosom friends.

Alfred Benjamin Hacker, a fine looking young fellow, who appeared terribly distressed, was first cautioned by the coroner that anything he might say could be used in evidence against him. On the night in question, he, with deceased and others, went out to light a bonfire. Witness took with him a revolver he had purchased from his uncle, some months ago. He and “Charlie” had “shot off” the revolver four times previous to the accident, when they were by themselves. After the bonfire was lit deceased said, “put another cartridge in,” and witness did so. The pistol would not fire, and he and Hunt proceeded to examine it. Suddenly it went off without any warning, and the bullet entered the side of Hunt. He had no wish to shoot his friend.

A Juror: They were the best of friends; always together.

The cartridge found in the revolver after the accident showed that the hammer had struck in two distinct blows.

P.C. Henry Moore, who called on the night of the accident, and with the assistance of others had deceased carried home on a stretcher. Witness immediately sent for a doctor, but at 4.30 a.m.a change for the worse set in, and he again sent for the doctor. Before the latter arrived, however, the young fellow was dead. The only thing Hunt said to witness was, “I am very cold, Mr Moore.”

Dr. Cressy gave evidence to the effect that he found deceased on the Monday night in a very collapsed state. There was a small wound in the left side, and the bullet had gone in between the fifth and sixth rib – inwards and then downwards. The deceased told him he felt a pain over the stomach, and thought the bullet was there. When the young man vomited there were blood stains in the same, and he was of opinion that death was due to internal hemorrhage.

The Coroner summed up, and pointed out the danger of allowing such a dangerous weapon to be put into the hands of those who did not know the use of it.

The Jury then returned a verdict  of “Accidental death.”

Deceased belonged to the Wilts Friendly Society but his life was not otherwise insured. His mother is a widow.

The jurors returned their fees to the mother of the deceased. A newly discovered photograph of my beautiful maternal grandmother, c. 1936. She’s on the left.