Another document I came across recently was the First World War Dependant’s Pension entry for Alfred Mansel Young. He is my brick wall and I love to discover any information about him. For some reason he left the family home in Portsmouth and went to live with relatives in South Wales.

In this entry for Dependant’s Pension his address is given as his father’s home in Portsmouth, 4 Woodland Street, Kingston. His father was awarded a small pension of just 5 shillings a week between 16 January 1919 to the 12 May 1920. 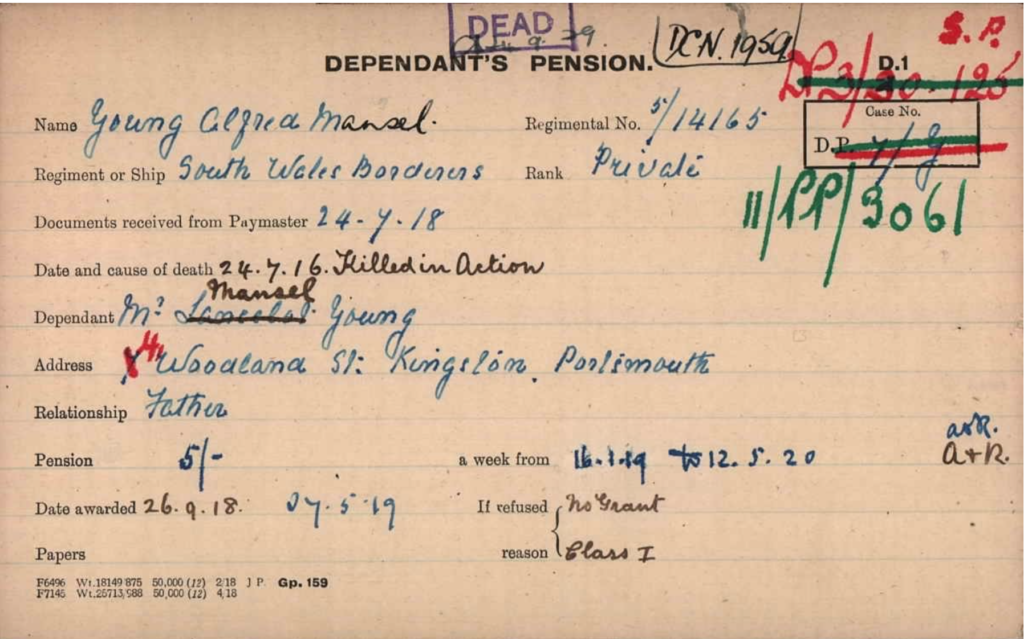 It’s been a while since I’ve had any time to record recent finds. I found this entry for my Great Uncle Alfred Mansel Young. Unfortunately I didn’t record the document it came from but it shows money paid to his father Mansel Young after his death. Need to do more research on this one!

To honour Memorial Day and the 75th anniversary of the end of World War II, I was able to get free access to Fold3 last week. I hadn’t heard of this site until I was browsing Ancestry and found a record on Fold3. I wasn’t willing to pay for access, so was happy to wait and I was rewarded!

The record was for my great uncle, Alfred Mansel Young. He died in the First World War and there was a record of him in the Pension ledgers. He died on 24th July 1916 and his father, Mansel Young, made a claim. It shows his address as 6 Woodland Street, Kingston, Portsmouth. It looks like a summary rather than a full record with any correspondence, but it was still good to discover. 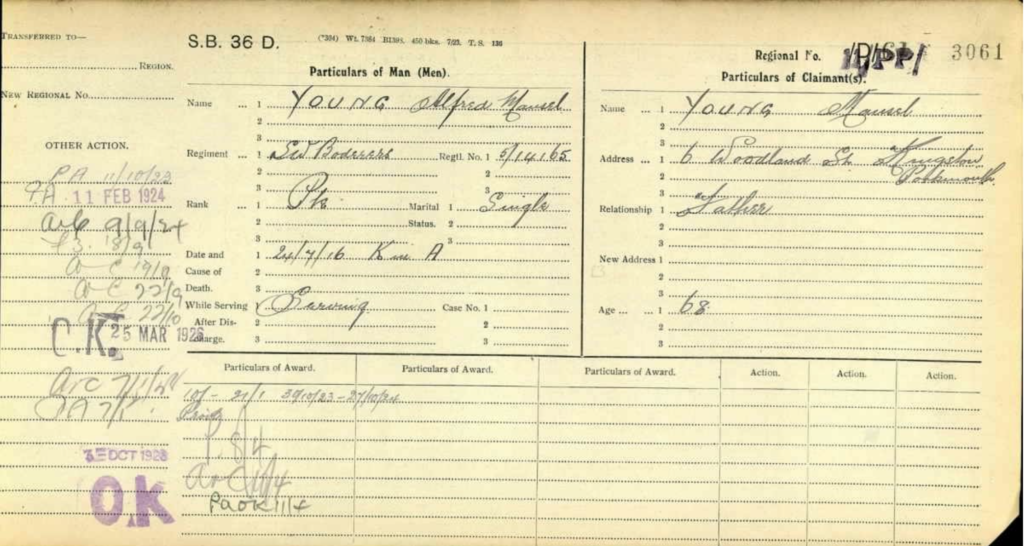 Leading family history website, Findmypast, has just announced that they will be making their entire collection of military records free for four days to coincide with Remembrance Day 2016.

From 09.00 GMT, 10th November until 23.59 GMT, 13th November 2016, all 70 million records within Findmypast’s “Military, Armed Forces and Conflict” category will be completely free to search and explore, providing family historians from around the globe the opportunity to uncover the stories of the military heroes within their own family.
This will include free access to:
Over 26.4 million British military Records
Over 43 million US and Canada military records
The most comprehensive collection of British Army service records both for WW1 and pre WW1 – these multiple page documents were released in partnership with The National Archives and are packed with fascinating biographical details such as the names and addresses of next of kin, physical descriptions and character references from commanding officers.
The most comprehensive British Naval collection available online
The most comprehensive Royal Air Force collection online
Over 2.6 million POW records in our exclusive Prisoners of War 1715-1945 collection.
Over 1.1 million WW2 casualty records in our collection of British Army Casualty Lists.
Exclusive Pals battalion records covering major cities including London, Liverpool, Manchester, Glasgow, Edinburgh and Birmingham.
Soldiers Died In The Great War 1914-1919 records
Comprehensive, illustrated Victoria Cross records
Over 1.5 million medal index cards, memorial rolls and roll of honour records
Military tribunal records – the records of thousands of men who attempted to avoid conscription
Military Nurses 1856-1994 records
Over 25,000 British Red Cross records

Free Access to Military Records on Ancestry {today only}

Did you know today commemorate 100 years since British tanks were first deployed at the Battle of Flers-Courcelette during the First World War?

For one day only Ancestry is giving us free access to their UK military records, but only until midnight.

The Military records include millions of service records, medal records, casualty lists and other Army records and Navy records.

Earlier today I received an email from lost cousins about First World War Soldiers’ Effects records now online. Years ago I contacted the National Army Museum about thee records  as I wanted to see if they had any record of my great uncle Alfred Mansel Young. They did, but I subsequently lost the information.

Anyway, last night I searched on Ancestry which is where the records are now available and was able to re-discover the record.

I am so happy to have a copy of this record. I don’t understand much of it but it does show that the money was paid to his father Mansel Young. I find this interesting as at the time of his enlistment he was living in South Wales and I’m not sure why.